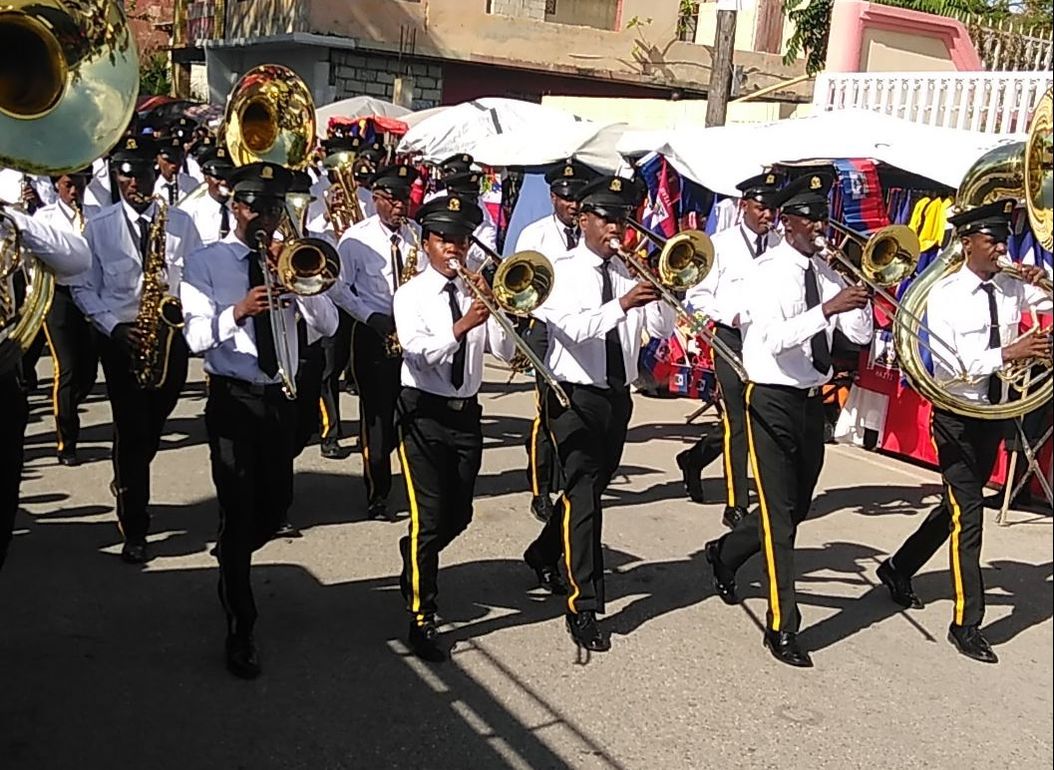 On May 18th I traveled with the members of the ASAPH Brass Band to the town of Arcahaie. It is the birthplace of Haiti’s flag. In 1803 Catherine Flon pieced together what would be the nation’s symbol. It was basically a French flag (blue, white, red) with the middle white part symbolically ripped out to symbolize the cleansing of the French (white) oppressors from the country.

The flag is a big deal in Haiti. Schools and government buildings still have a flag ceremony each morning at 8:00. And people take to the street on Flag Day to celebrate the flag that ‘brings us all together’.

The ASAPH Brass Band has done Flag Day parades for several villages. This year we decided to visit the national ceremony and get a first-hand look at Haiti’s national band. We planned. We prepared.

We left home in the evening and spent the night before in a school classroom at the highway in order to depart early enough to arrive on time. We arrived ten or fifteen minutes before eight.

We found all of the trappings of an official state ceremony : two platforms with rows of white chairs, ribbons, flags, a podium, and one huge flag pole. Red and blue banners above our heads read OUR FLAG IS UNITY and OUR FLAG IS RESPECT.

The podium was situated across the street from a Catholic church. A set of about twenty stairs led up to the church doors. People were beginning to fill up the stairs. It was a perfect spot to view the ceremony. The speakers would face you. The band and drill teams would perform in the street in front of you. We took our spot on one side of the stairs and waited excitedly.

I noticed a lady in a jacket and a badge speaking to a helmeted soldier. She was motioning to the steps where we and so many others stood. Before long a line of armed soldiers was walking shoulder to shoulder toward the crowd. They politely told us we couldn’t occupy the stairs. They must be cleared.

We obeyed, realizing we had lost our great vantage point. We moved down into the street beside the church. We wouldn’t see much, but we’d be close. Then the soldiers told us the street must be clear. We were pushed across the street into another street and sidewalk now severely overcrowded. Before long, with buildings to our back, a line of helmeted armed soldiers told us we must get back. BACK! There was nowhere to go, and by now we didn’t want to go anywhere either.

It was in this tension that the ceremony slowly began. Official vehicles sped through the streets, each time causing the soldiers to push us back a bit more. These were government officials arriving late and getting a king's welcome by their armed officers.

The line of soldiers was shoulder to shoulder, weapons in hand. They wore kaki combat pants and coats with black plastic knee pads and elbow pads. They had police sticks on their backs and helmets on their heads, visors up. Some had shields.

Innocent people would appear from time to time seeking a chance to get closer to the ceremony. They had no way of knowing that we were all pushed back already. Police would angrily accost them and push them away.
One young man of about 25 appeared with a Haitian flag draped over his back and shoulders. He was just trying to get closer to his country’s flag ceremony. He made the mistake of passing behind a policeman. With no warning, a second soldier appeared and swung his baton with full force into the leg of the young man. I saw the swing, but not the actual blow. I did hear it…an awful sound of a human body part being beaten brutally. The young man stood straight. I was able to see his whole face. There was not a shred of anger. Tears poured from his eyes immediately dripping off his chin and onto the ground. It was a river of pain, both physical and emotional. He did not back up. He calmly tilted his head and said to the soldier, “Why did you do THAT ?” That response was enough for another soldier to come running and give the impression this was about to get worse. They pushed the young man back into the crowd.

The young man held on to his flag around his neck. The soldiers were each wearing the very same flag…a patch on their shoulders. The great sign above all of us proclaimed : OUR FLAG IS RESPECT. Another shouted : OUR FLAG IS UNITY.

That day, a young man was trying to love his country, the poorest and hardest-to-love country in all of the western hemisphere. Young Haitians everywhere do the same. The ASAPH Brass Band is full of such young people. They try to love a country that sucks every drop of respect from them at some point in their lives. It was a true deception to witness what happened at the edge of a nation’s flag ceremony that day.

The soldiers were doing their job. There was, in my appraisal, no plan for a crowd of regular people to attend this ceremony. The senators were there in air-conditioned vehicles and white suits. Certain priests (Catholic and Vodou) were honored with special treatment, but there was no plan for regular people to even see the ceremony. Nor was there concern for what happened to those who had the audacity to try to see it. Some had traveled from the other side of the country, but the police were obliged to remove us all so that the ‘elite’ folks and TV cameras could participate more freely.

The division between THEM and US grew wider at that ceremony of unity. I am obliged to edit my own impressions of the governing class that I experienced that day. It was a negative experience.

I will never attend a Flag Day ceremony in the same way. The poor young man who was beaten on his way to a celebration will probably never look at policemen or any authority the same way again. I hope that the policeman who beat his fellow countryman will address with his superiors the total lack of preparation for a national ceremony.

The band left the ceremony and ate at a restaurant in that same town…a private enterprise. There, the owners received us as kings. The water was ice cold. The food was tasty. They had live music. The hosts welcomed us and made us feel at home. We were human again.

Later that day, our bus was stopped by a policeman. His vehicle was broken down, and they had no tire wrench to change a tire. Our bus driver graciously offered his. He not only offered it, but ended up helping them fix the tire. They were very polite. They made a point of speaking to me, the foreigner, to express their thanks and offer apologies for slowing us down on our trip home. I wondered about what would have happened if our bus driver had refused.